__Bletchley Park__ is an English country house and estate in Milton Keynes (Buckinghamshire) that became the principal centre of Allies of World War II World War II cryptography. The mansion was constructed during the years following 1883 for the financier and politician Sir Herbert Leon in the Victorian Gothic, Tudor, and Dutch Baroque styles, on the site of older buildings of the same name - wikipedia 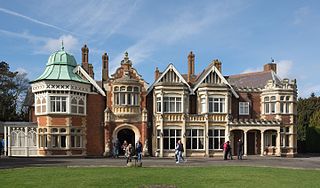 During World War II, the estate housed the Government Code and Cypher School (GC&CS), which regularly penetrated the secret communications of the Axis Powersmost importantly the German Enigma (machine) and Lorenz cipher ciphers; among its most notable early personnel the GC&CS team of codebreakers included Alan Turing, Gordon Welchman, Conel Hugh O'Donel Alexander, W. T. Tutte, and Stuart Milner-Barry. The nature of the work there was secret until many years after the war.

According to the official historian of British Intelligence, the "Ultra" intelligence produced at Bletchley shortened the war by two to four years, and without it the outcome of the war would have been uncertain. The team at Bletchley Park devised automatic machinery to help with decryption, culminating in the development of Colossus computer, the world's first programmable digital electronic computer. Codebreaking operations at Bletchley Park came to an end in 1946 and all information about the wartime operations was classified until the mid-1970s.

After the war, the General Post Office took over the site and used it as a management school, but by 1990 the huts in which the codebreakers worked were being considered for demolition and redevelopment. The Bletchley Park Trust was formed in 1991 to save large portions of the site from development.

More recently, Bletchley Park has been open to the public and houses interpretive exhibits and rebuilt huts as they would have appeared during their wartime operations. It receives hundreds of thousands of visitors annually. The separate The National Museum of Computing, which includes a working replica Bombe machine and a rebuilt Colossus computer, is housed in Block H on the site.

I interviewed at UMIST, the professor wanted to impress me and sat me down in one of Alan Turing's labs. It was the last place he worked before his suicide. I was a bit too young and uninformed to really understand the significance of my interview location. Alas, I aced the math and engineering with 5 straight distinctions but failed to pass the English for the 2nd time. Passed on the 3rd try, I was sent to Coventry [University]. I did end up learning signals and cryptography at Blandford Camp. page